Hello loyal blog readers, Eric here. Our final day in Timor-Leste was one of the highlights of the tour so far. We started the day with a visit to “Arte Moris”, a free art school and commune in the middle of Dili. The story of this place forming after 25 years of Indonesian occupation is fascinating and inspiring- check out what these guys are up to at http://www.artemoris.org 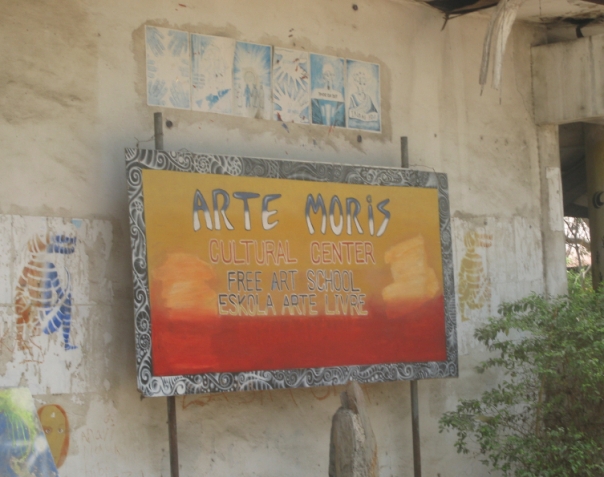 We arrived at the grounds and were very warmly greeted by the whole crew. After getting our sounds right through the PA system, we decided to ditch the microphones and jump down to play some tunes acoustic, up close and personal. After kicking into the first song one thing became very clear watching their reactions- these guys could GROOOOOOVE. The overall energy of Timorese seems to be very raw, loose, and rhythmic, so after we finished our little set we were ready to hear some traditional Timor songs and JAM. To make the vibes even sweeter, about 15 itty bitty kids from the International School came to get down to the music just before the jam started.  I’ll let the video speak for itself.

We were given a great tour of the whole Arte Moris before we left, including amazing galleries and exhibitions, living quarters, and library/ media room, an office, music and jam spaces, and living quarters. By far one of the coolest places I’ve been in the world so far.

We finished off our Timor-Leste run with an evening performance at the Sunset Fair, a wonderful weekly happening here in Dili complete with hand-crafted goods vendors and an assortment of delicious food, including Kangaroo (we sadly didn’t get to try it). We ended our set in the appropriate Earth String Band style- joined by five guys from Arte Moris playing a couple of their traditional songs and one of ours. The crowd went nuts. We all retired back to the beach after the show and continued to play music all night, I’m gonna miss the guys! Timor-Leste, beautiful people and a beautiful landscape, truly a hidden gem of country. Now off to South Korea! 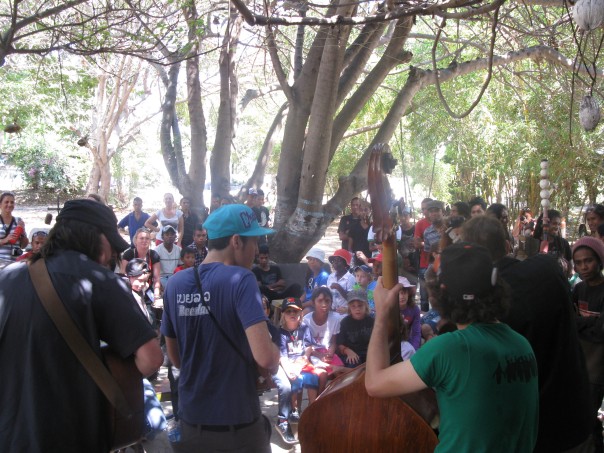 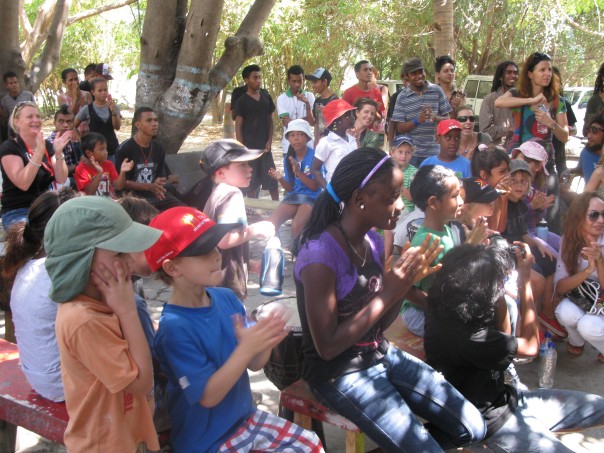 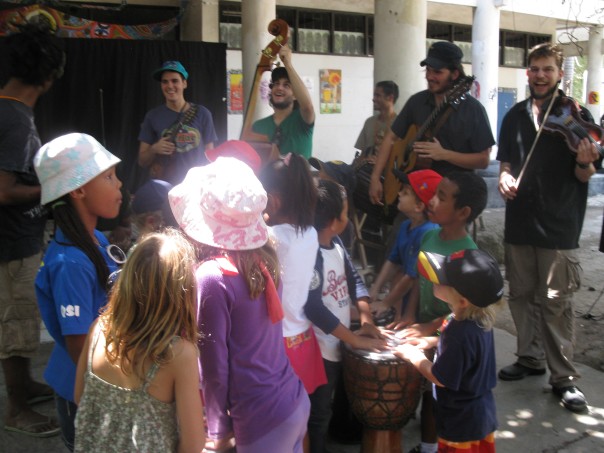 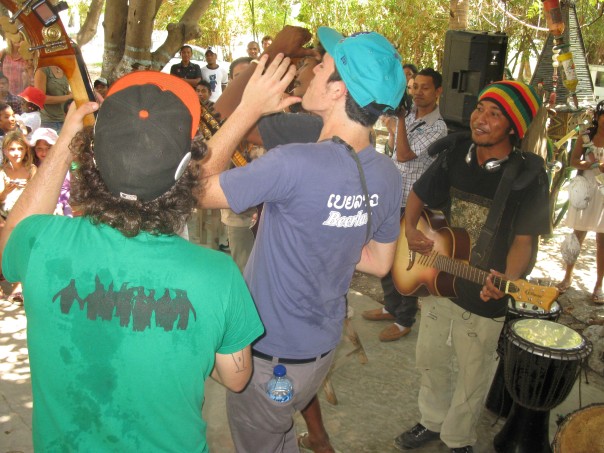 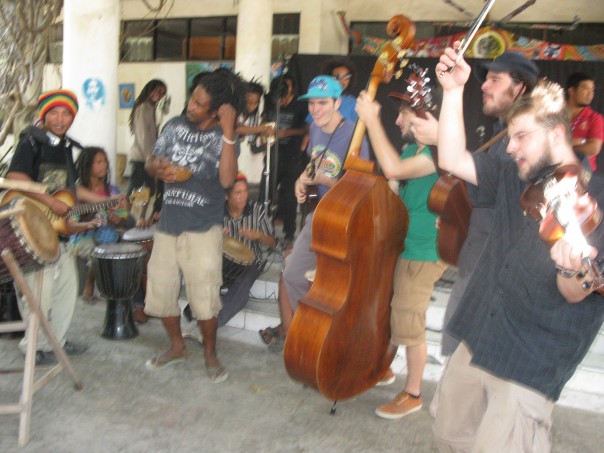 From Concert at Ambassador Fergin’s Residence: 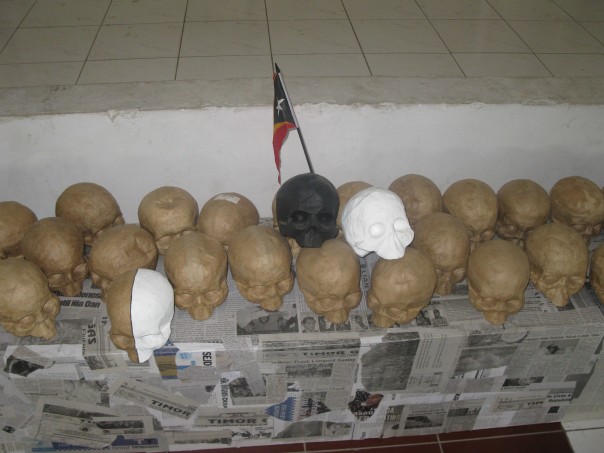 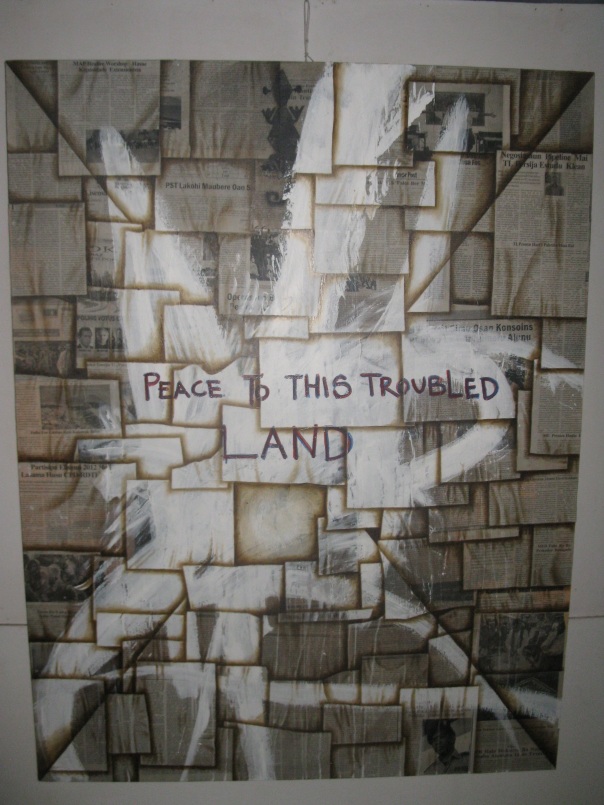 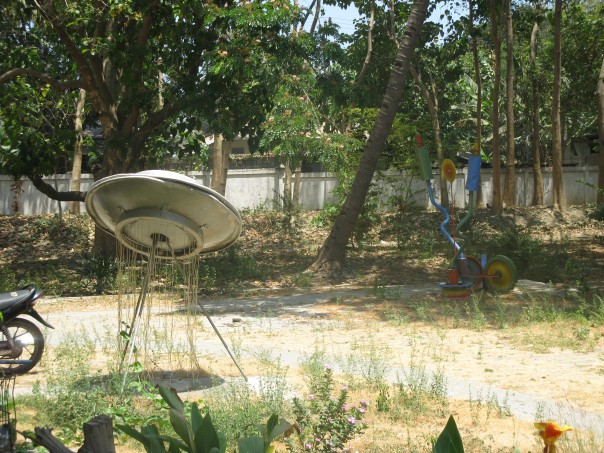 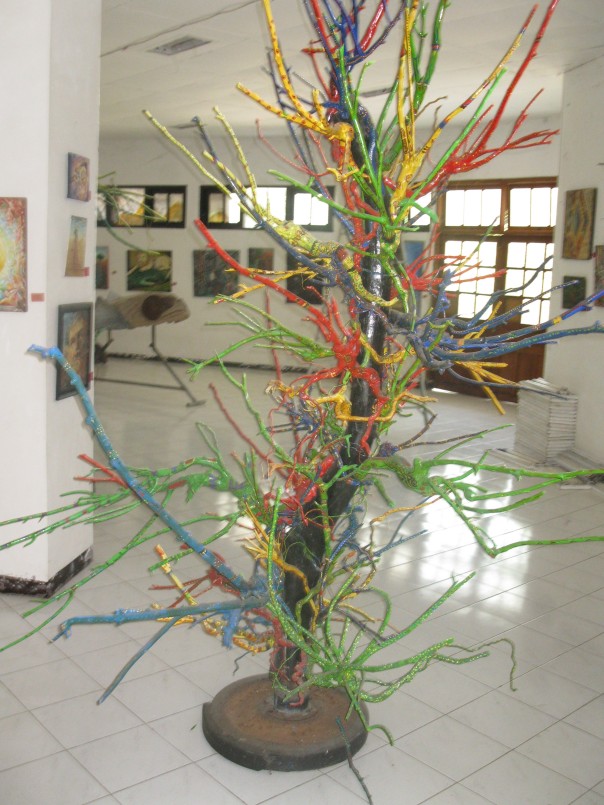 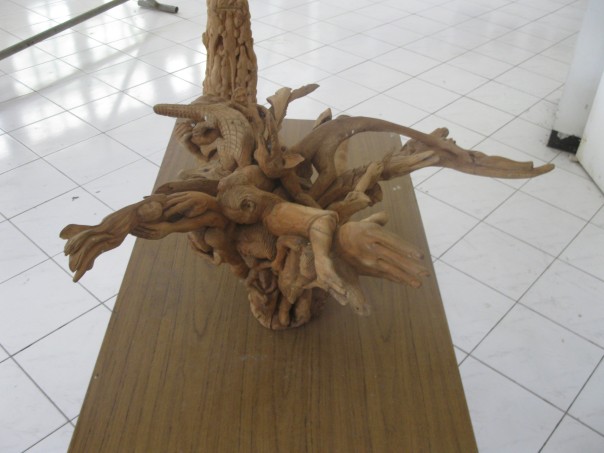 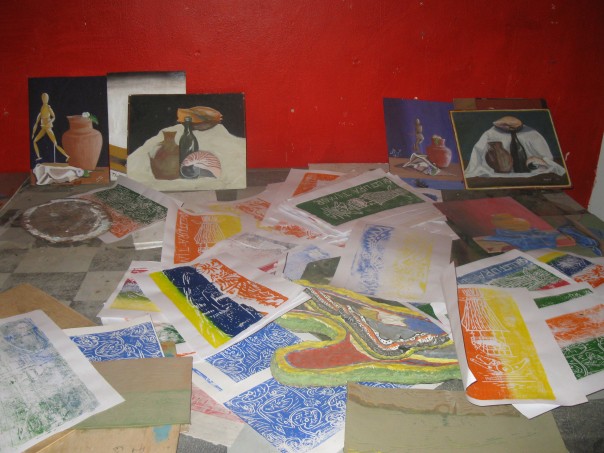 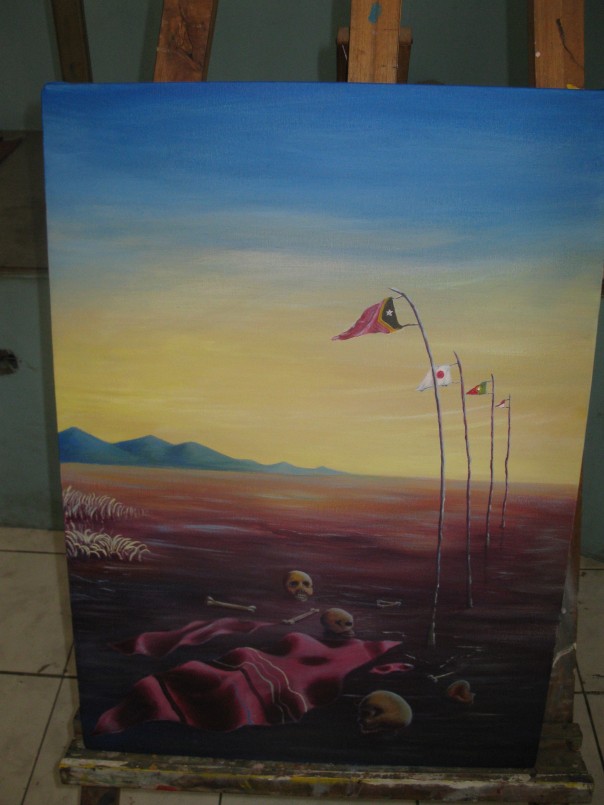 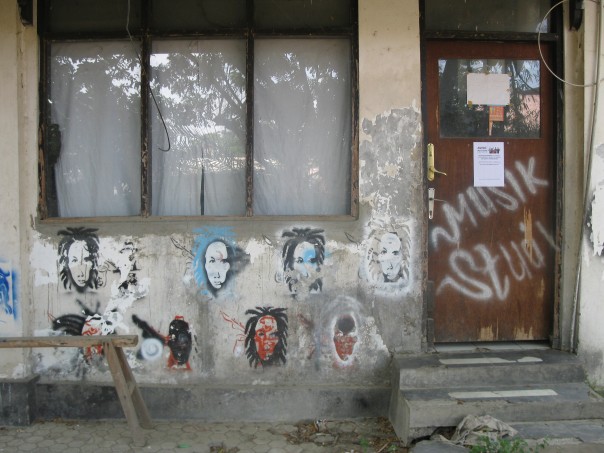 Eric here- Busy busy busy in Cambodia today folks!  We started out with an early morning visit to Mith Samlanh- a center for street children. The raw energy and enthusiasm of the kids was incredible and infectious. After we played a couple of lively old-time tunes, Stash and I jumped off stage to demonstrate the instrument roles while Andy and Sam held down the groove. They quickly started thumping the bass notes with their  feet and pitter-pattering fiddle melodies on their chests, clapping on  mandolin chops and playing air guitar- screaming wildly the whole time. Even though is was a fairly short set, it’s safe to say that by the end we were all the most exhausted we’ve been after anything on the tour so far! Truly rewarding experience-  video below!

A short rest and some lunch at the hotel, and then we were off to Cambodian Living Arts for an intimate musical exchange with some AMAZING traditional Cambodian musicians between the ages of 18 and 22. These guys were straight killin’. I was immediately excited when the first musician walked in with a “bangjo”, which was like a mix between an asian lute, banjo, and mandolin. Then poured in the “tro”, “thon”, “khim”, and “roneat thung”, which are basically fiddle, drum, hammered dulcimer, and xylophone. They played for us, we played for them. Everybody was stoked. Then the jamming commenced- we learned some beautiful cambodian tunes and taught some traditional American music. We also taught them “Stingray Stew”- which is a comprised of music we heard in Laos that we put to an old time groove. So we played Lao melodies to an American groove with Cambodian musicians. Now THAT  is what I call an Earth String Band.

We ended the night with a concert on the street- check it out!

Hello folks this is Eric here to tell ya about our last couple days in beeeeeautiful Thailand! We finished our time in Phitsanulok with a live TV broadcast on saturday afterrnoon- big thanks to our intimate studio audience, radiantly friendly host, and sound/ film crew for a great show! Big ups to Izaak from the US embassy for killin’ the interview. After the show we changed outta our fancy clothes and geared up for the five hour drive to Chang Rai- on our way out Dang, Administrator at Pibulsongkram Ragaphat Univerisity, gave us two big bags of small bananas for the drive (it seems like the longer we’re here, the smaller the bananas get and the smaller the bananas get, the better they taste!) 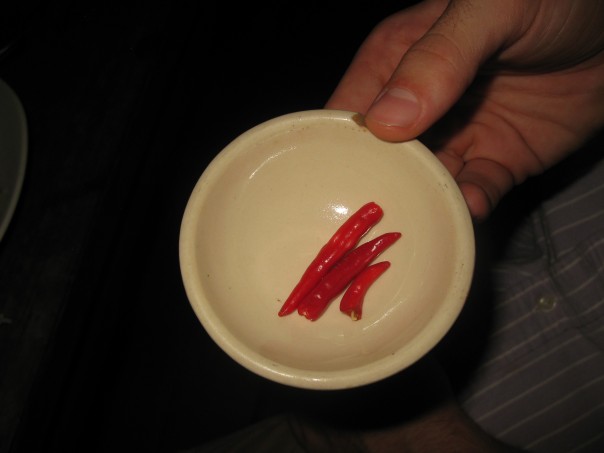 Driving through the mountainous Thailand country was a nice break after all the gigs, and we stopped at the nicest little outdoor restaurant for come chronic home cookin. We were the only people at the place and toward the end of the meal, I thought it was about time for a chili pepper eating contest. I’m not one for super super spicy foods, but Andy and Stash were ready to compete to see who was the real man of the Earth String Band. I took to the position of referee/ cameraman and ohhh boy did I get some footage (check out the video below).

We awoke in Chang Rai this morning for our day off and set out to ride Elephants through a little village, the name of which I can’t remember or probably spell. After a half hour boat ride,  we jumped onboard the elephants (never thought I’d get to say that) and began our hour long journey, though it wasn’t long before some serious turbulence. We were on four elephants marching in a row when suddenly the first elephant was scared by some chickens, which caused the second elephant (Sam and Izaak) to charge at the first, which then caused the third elephant (me and Stash) to turn around and run in the other direction. It was terrifying and totally awesome. We continued through the village for an hour and then fed the elephants bamboo and bananas upon our return. 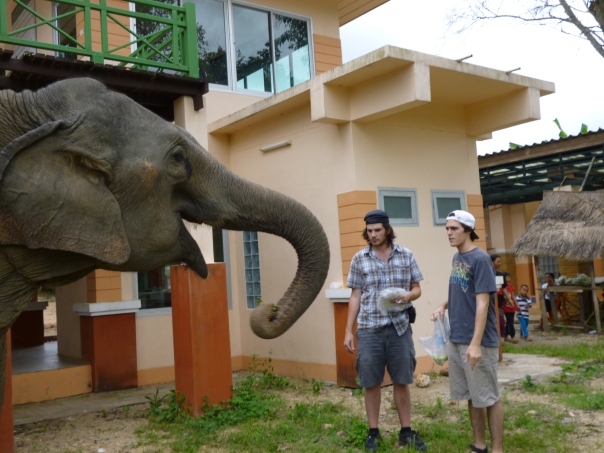 We departed the elephant camp to check out the Longneck Hill Tribe- I’ll let the pictures and videos speak for themselves. That’s all for now, I’m all full of fried Thai street food and coconut ice cream, and we wake up early tomorrow for a music school workshop followed by an evening concert at Mae Fah Luang University. Ra tee sa was! (good night!) 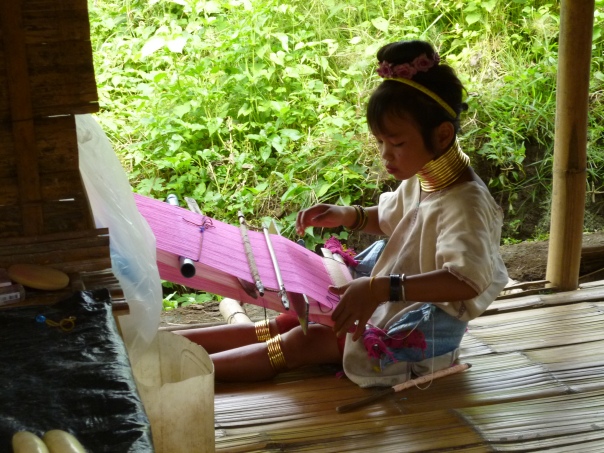 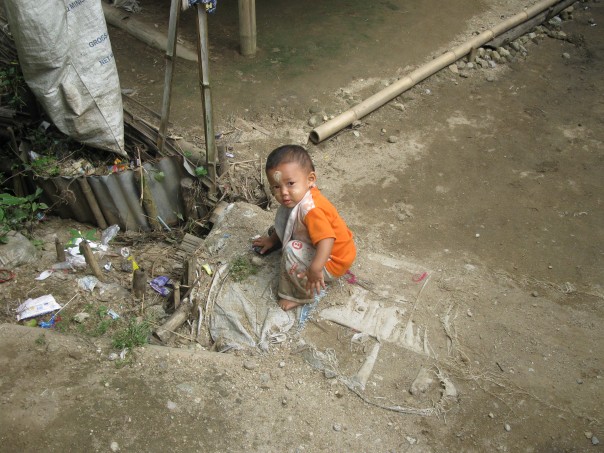 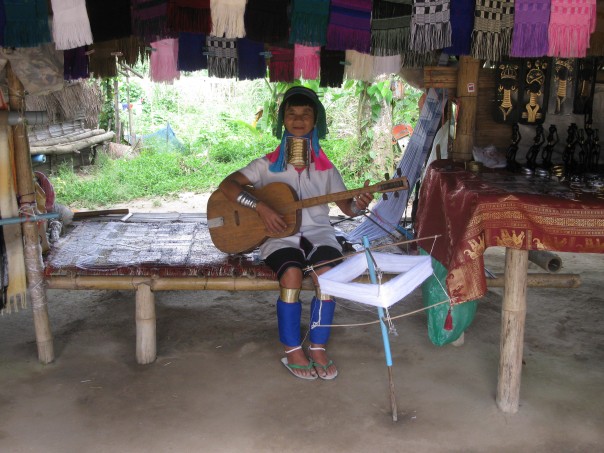 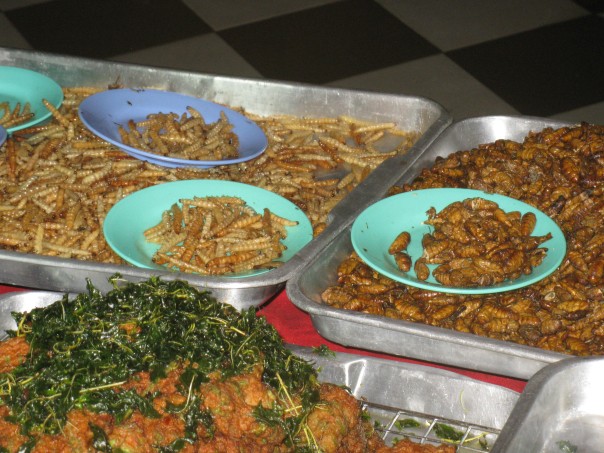 Hello earthstringblog readers, Eric here.  What a day, what a day! We headed out for the embassy this morning for a meeting with the US ambassador to Laos, Karen Stewart. We all learned so much in just a half hour about the rich political/cultural history of this country and its relationship to surrounding southeast Asian countries and the US. Karen was quick to admit that being an ambassador is a pretty sweet gig. This became exceptionally clear to us upon arriving at her residence, a GORGEOUS property purchased by the US government in the 1970’s with a large downstairs area for social events. This intimate setting was the venue for our first concert of the tour, and we could not have asked for a better audience or warmer vibe.

During some shmooozing, hors d’oeuvres, and drinks before the show, we stumbled upon Karen’s personal collection of traditional Asian instruments in the hallway and just couldn’t resist (see video below). Before we knew it- SHOWTIME!  We were a little nervous at first, but quickly loosened up as the audience’s radiant smiles and energy filled the room. ‘Twas a groovy melodious hootin’ hollerin’ JAYUUMM!!  Two 40-minute sets later we didn’t want to stop, but I suppose eating and sleeping are gonna be necessary on this tour so all good things must come to an end. We were each presented with a beautiful bouquet of fresh roses after the performance and an hour of photographs and meet/greet followed.

A deeeeeeeeliciously spicy late night meal accompanied by our new favorite “Beer Lao” was last on the agenda for the day- we ate on a great little outdoor patio of a restaurant surrounded by a monsoon! The thick and sticky climate of this place is growing on me! alright alright ladies and gentleman it is bedtime for chroberson- we leave tomorrow morning to teach a workshop for 30 students at the National School of Music and Dance. till next time! 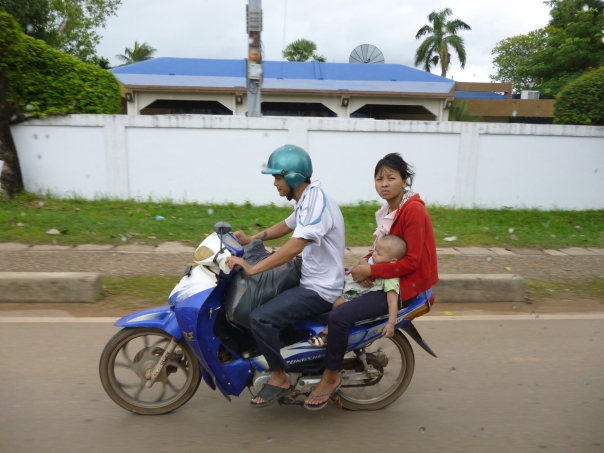 Sam took this photo from the car en route to the Ambassador's residence. 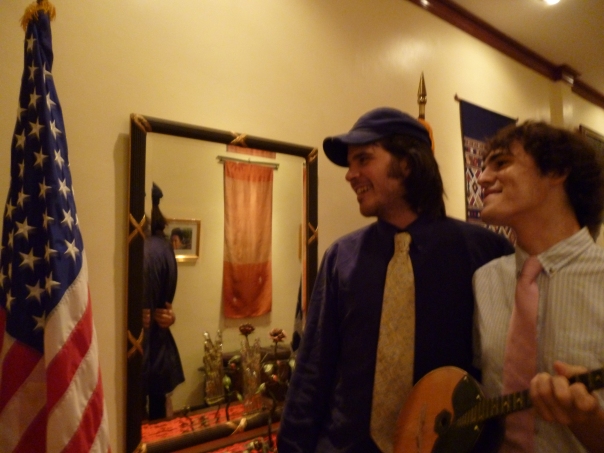 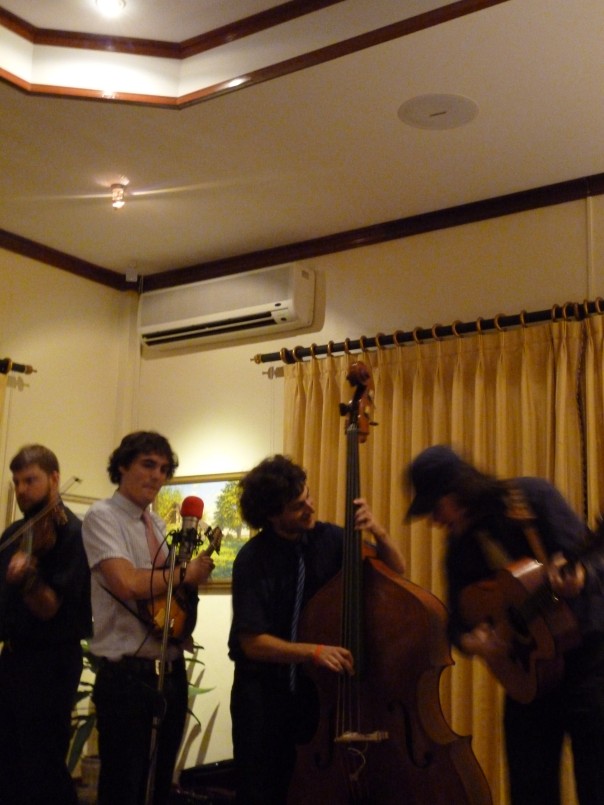 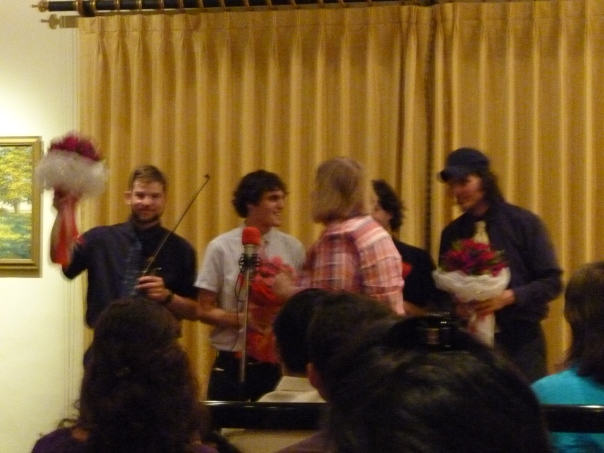 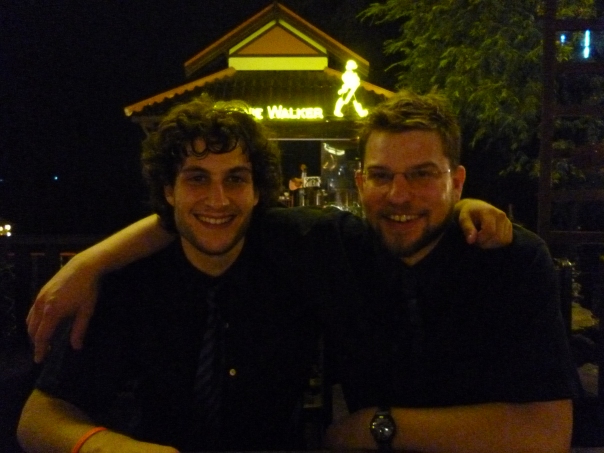 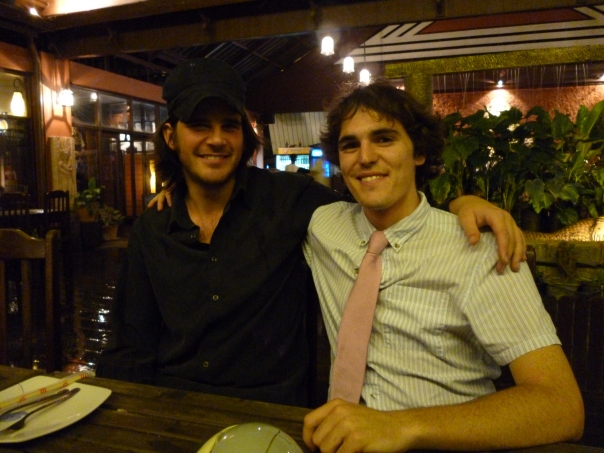 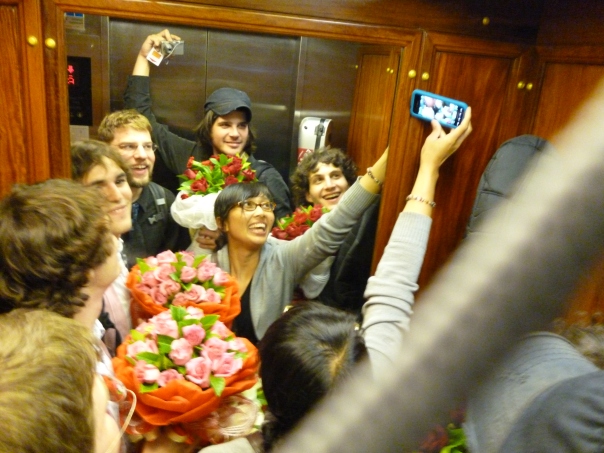